As an alternative for the three-wheeled base of the RoboCup Middle Size League soccer robots of Tech United Eindhoven, an eight-wheeled version was designed consisting of four wheel sets, each having two hub-drive wheels. Figure 1 depicts such a wheel set, whereas the realization of the system is shown in Figure 2. The main advantages compared to the three-wheeled platform are the possibility to apply the torque delivered by the motors in the desired direction in order to achieve a higher acceleration in this direction.

Contributions in publications about this platform can be found in

The eight-wheels system is a redesign of the three wheeled version of the Tech United RoboCup Team Limited Edition (TURTLE) robots. As such, the base has been reconsidered, while the the upper body and the the ball handling and kicking mechanism have been reused. Therefore, the focus of the hardware elaborated on this page is on the wheel sets and the assembly of the entire system.

This platform consists of four wheel sets, each having two hub-drive wheels. As such, the platform is five times over-constrained. To avoid an over-constrained design, each wheel set has an internal degree of freedom. This degree of freedom is visualized in Figure 1 by the white lines. The last platform-constraint is addressed by a hinging axle at the back of the robot, which is shown in Figure 3. 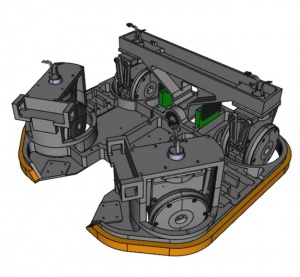 Figure 3: Wheel configuration including the base plate and hinging axle of the 8-wheeld Turtle